Some insights on Telraam data validation

Precision, accuracy, and validations of the original Telraam sensor • Written by Kris Vanherle on 28 July 2022

Since the start of Telraam, our sensors counted over three billion road users over approximately 5000 locations. That's a lot! In this article we want to share some insights on the precision, accuracy and validation of all these data. 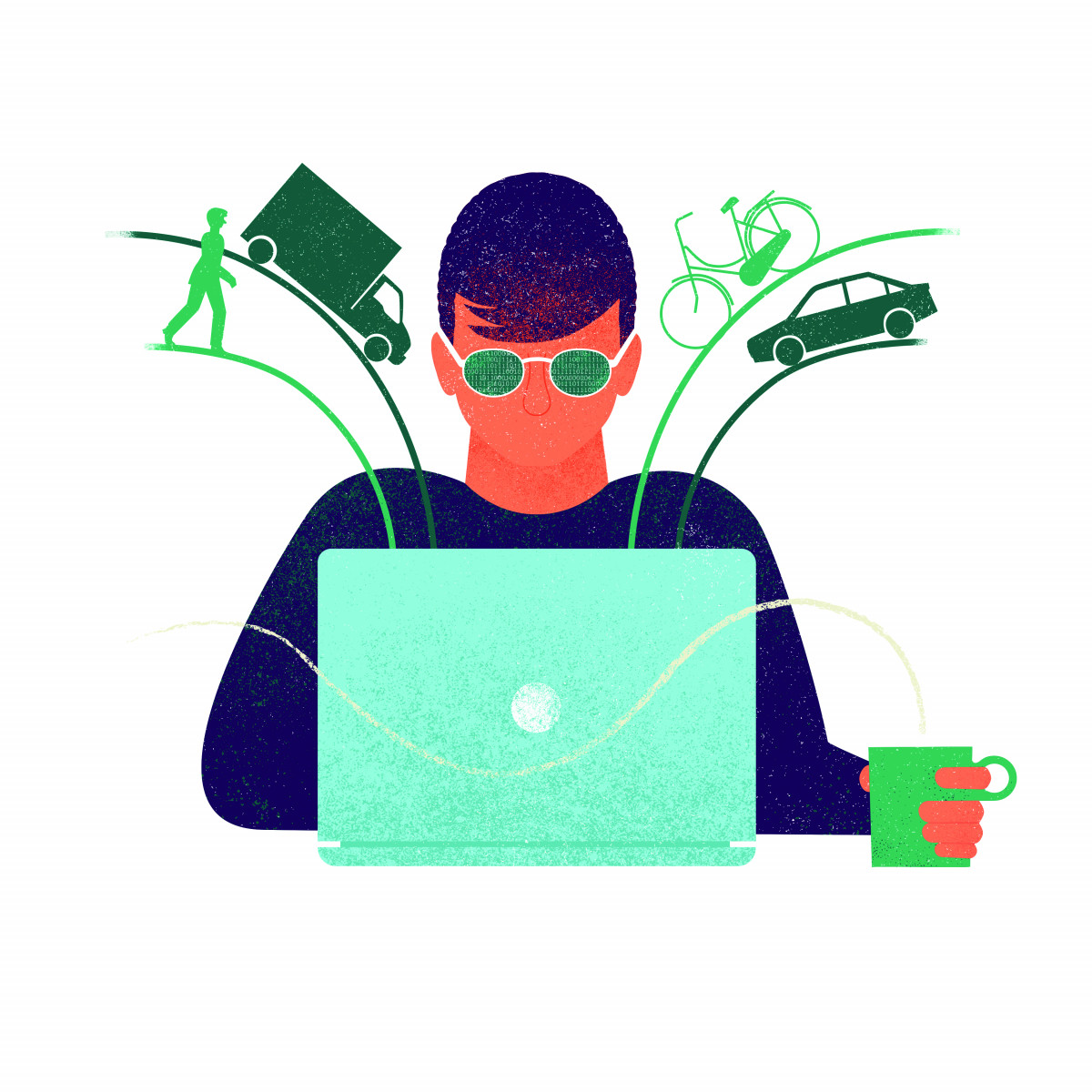 Since the start of Telraam, our original Raspberry Pi-based sensors have counted three billion road users over approximately 5000 different locations (by July 2022). We have published an extensive white paper (click here) about how our sensor counts and classifies objects into the four traffic modes (heavy vehicles, cars, cyclists, and pedestrians), explaining how the initial calibration of the method was done using data from the three first Telraam prototypes, that the expected accuracy strongly depends on the placement of the sensor, and we provided feedback on the validation data that we have received from various sources to establish the accuracy and the precision of our sensor. In this article we provide a detailed summary on precision and accuracy, as a reflection to the validation counts and experience that we have collected over the years.

To be able to fully understand the significance of the numbers that will follow below, we have to first define a few concepts.

We have not carried out systematic tests on the precision of the original Telraam sensor, but simply because of the techniques used (e.g., a relative high resolution camera - compared to AI vision techniques -, a fixed field of vision, a fixed classifier, etc.), the sensor to sensor scatter is expected to be very low (~ a few percent), therefore it is safe to assume that the precision of the sensor is high, and it is not a significant contributor to the final perceived measurement error.

Accuracy can be tested by performing validation counts, meaning that simultaneously with a counting Telraam, we need another credible source which can provide us with the ground truth for the measured interval in question. In practice this mostly involves manual traffic counts, where citizens simply note down the road users passing in front of their window by direction and by traffic mode. In other cases it might be data coming from a well tested and validated alternative counting method, such as pneumatic (pressure) tubes, but since these traffic counts are often carried out in the framework of a commercial venture, getting such data is only possible in very rare cases. Then by comparing the validation data to the Telraam data, we can check the accuracy of that single Telraam. Since we already argued that the precision of Telraam is very high, the accuracy derived from even a single measurement (one hour’s data) can be considered a good estimate of the accuracy of the Telraam on that specific location, assuming no special situations were present during the validation count (such as an atypical traffic situation, or an obstruction in the field of view of the Telraam sensor). Of course longer time series will provide better validation.

Validation of the speed measurements is also possible, primarily by using radar guns or radar installations. This has also been done - albeit a very limited number of times - by local police. Other methods would include recording videos of the traffic flow between two locations separated by a known distance (e.g. two lines painted across the road surface 20 metres apart), and calculating speeds based on the time it takes the vehicles to travel the indicated distance. We plan on using this method to validate our upcoming new Telraam S2 device.

The accuracy of the original Telraam sensor

Before proceeding with the discussion of the collected validations, we can already give a general overview on what can influence the accuracy of our sensor. See also FAQ article "Potential inaccuracies with Telraam

Telraam sensors are meant to be placed on the first floor, not too far from the street surface (therefore not behind a very large front garden), with the camera pointed towards the middle of the road, making sure that no road users are left out of the field of view (as much as practically possible), and preferably not near traffic lights with a long cycle. There should be no obstructions (e.g., balcony railing, light poles, constantly parked vehicles, trees, etc.) in the field of view, and no movement that is not related to traffic (e.g. trees with significant visible movement, mirrors reflecting traffic and lights, etc.). As soon as some of these conditions are not fulfilled, that will significantly downgrade the expected accuracy of this Telraam installation. Atypical viewing angles, or obstructions will likely influence not only the total counts, but the performance of the classifier too.

Even a perfect Telraam installation - according to the criteria above - might suffer from temporary adverse effects that can potentially downgrade its accuracy. Some of these are intrinsic to the used computer vision, object tracking, and classification technologies (and cannot be further improved on the original sensor hardware), while others are caused by mostly temporary external factors (which can often not be influenced by the user).

Due to the fact that many parameters influence the final accuracy of a given Telraam sensor, it is practically impossible to give one single value that could predict the accuracy in a specific situation, but from the validation counts that we have received we can estimate the performance in typical conditions. After these values we provide a detailed explanation of the most common inaccuracies and their sources, which separate an optimal installation from a typical or problematic installation. Understanding these will help you as a Telraam user to make sure your installation is as optimal as possible.

In the well documented, most controlled validation cases, the typical accuracy that we see in the collected data is around the 85-90% mark for cars and heavy vehicles in total, while slightly lower for pedestrians and cyclists (any larger deviation points to issues with misclassification and/or not optimal camera coverage, which will be discussed later).

Below is a typical example of a manual validation (done by the local police in Hoeselt) - in this case the totals from four hours over two days are shown. It is clear that Telraam does a very good job concerning the total number of the total road users but some slow traffic is clearly being misclassified as motorised traffic.

We can safely assume that in optimal conditions the accuracy will be higher, around the 90-95% mark[c], which is illustrated by a few very good matches in the validation data set. Unfortunately - due to mainly the variable external factors mentioned earlier - it is very difficult to keep a Telraam sensor constantly in optimal conditions, and there is a significant scatter in accuracy in the received validations. An example of a good manual validation over a single hour (by a citizen taking part in Straatvinken) can be seen below (with only minor misclassification across slow and motorised vehicles).

Finally, just as a further example, we show one comparison between Telraam and pressure tube measurements over the course of a full day below, generally showing a good match in the observed trend, and volumes, both for cars and for cyclist 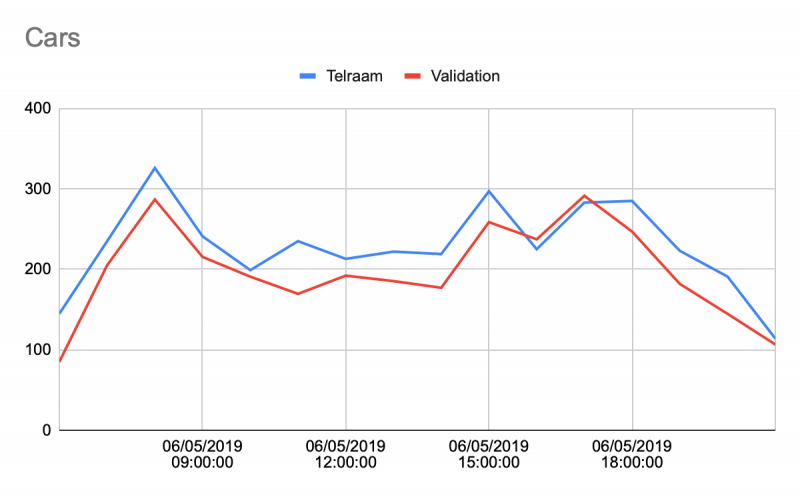 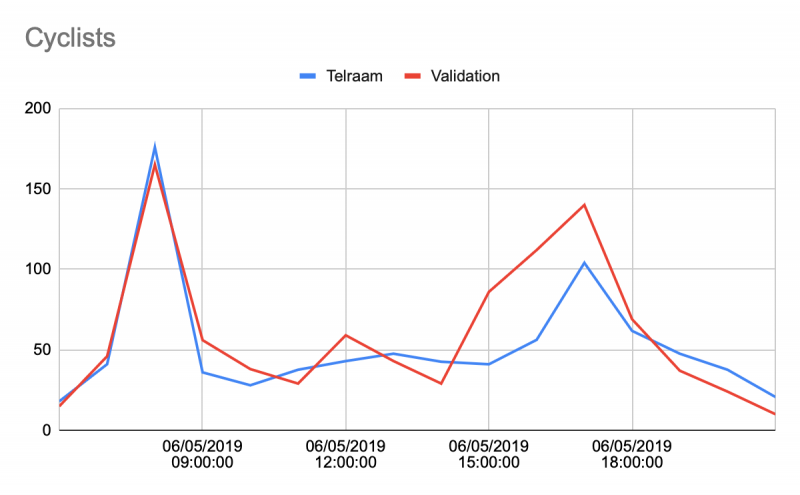 In most cases, while misclassification can skew the modal split to some extent depending on how optimal the Telraam installation is, we can see that the observed number of total road users matches very well (typically within 95%) within the Telraam and validation data. Deviations mostly occur when the Telraam sensor cannot see the whole street properly.

Finally, concerning the derived speeds, we have only two validations (using radar), but these suggest that Telraam underestimates the speeds by around 10%. We have one example available, comparing speed estimates of Telraam with a high-end system (see image below). We would need more data to confirm this. 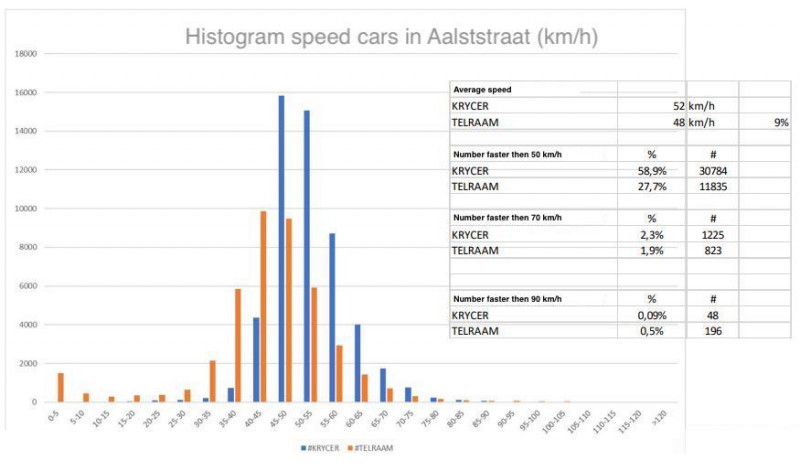 Potential inaccuracies and their sources

We can provide a comprehensive list of the most common inaccuracies that might be found in Telraam data, along with their potential root causes. As a user you should try to eliminate these root causes as much as practically possible, to achieve the best possible accuracy with your device.

It is clear that many of these listed potential error sources are related to another, and that the most important factor towards achieving high accuracy is the optimal placement of the Telraam sensor. If you're feeling excited to start validating some of your own data, we invite you to the step-by-step 'Validate your own Telraam data' FAQ article. Want to share your results? Please do so by mailing them to support@telraam.net.