Municipality of Heusden-Zolder wants all students to bike to school

Like many other municipalities, Heusden-Zolder wants to encourage children (and parents) to cycle to school. The Limburg municipality's Municipal Schools Plan, for instance, aims to design school environments on child-size and to improve road safety on the main routes to and from local schools. Eventually, all schools in the municipality should be safe enough so that parents and children can cycle and walk to school carefree. 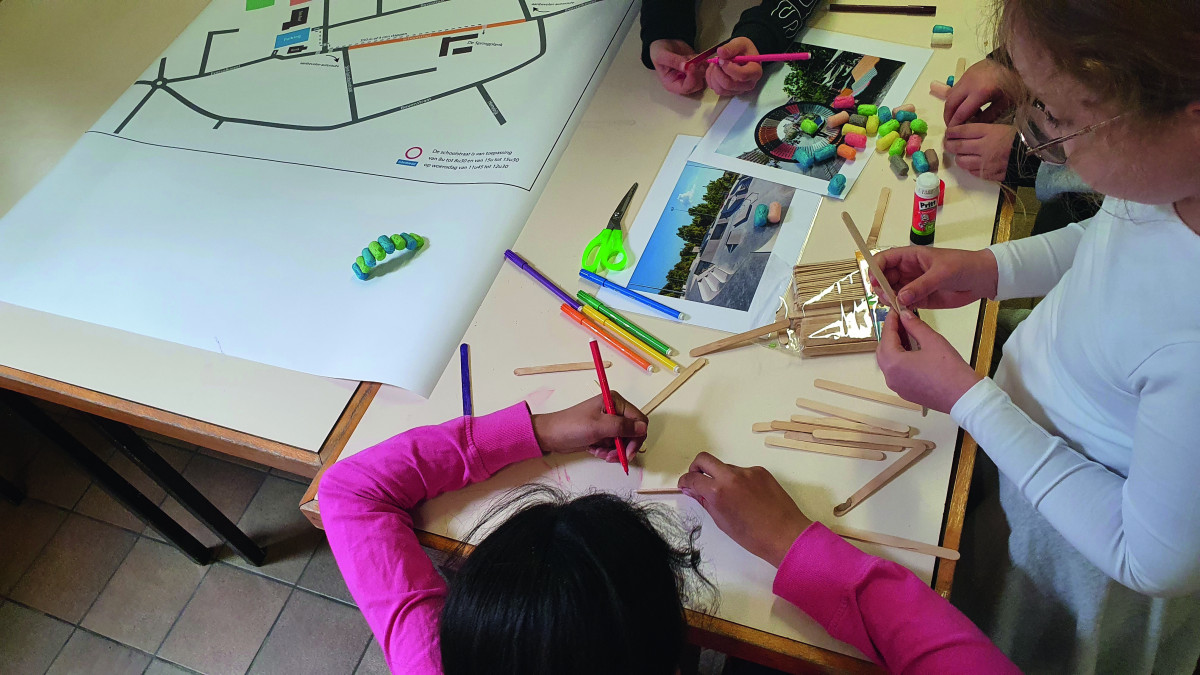 To realise its ambition, the municipality of Heusden-Zolder worked with Telraam and Mobiel 21. The result was a project in which objective traffic counts, citizen science, co-creation and test setups lay the foundation for a broad-based redesign of a school environment. The success of that process, in which all local stakeholders were involved, is a blueprint for the rest of Flanders.

Telraam in and around the school: citizen science in action

Together with Telraam and Mobiel 21, Heusden-Zolder launched a change program in the vicinity of Vrije Basisschool De Springplank in the Eversel sub-municipality. Eight Telraam devices were installed in the school environment and on the bicycle routes to De Springplank. A Telraam is a sensor that automatically counts the number of pedestrians, cyclists, cars and heavy vehicles in a street and registers the direction of travel. In addition, the device also measures the speed of motorised traffic. Not only did the school install a Telraam, but residents of nearby streets also made their windows available for a Telraam device and thus automatically collected reliable traffic data. This data is publicly available via www.telraam.net, which is also important to record the original traffic levels to evaluate the effects of measures further down the road. Telraam thus offers citizens a voice to back up their insights about traffic in their street or neighbourhood. “School children, teachers, parents and board members take an active part in installing the sensors. A great example of citizen science in action ,” said Glenn Godin, sustainable mobility project officer at Mobiel 21.

From problem to solution through co-creation

In a first phase, the Telraam devices collected ‘baseline’ data on the existing traffic situation between September 2021 and March 2022. This information was useful for accurately mapping bottlenecks from the start. The objective data subsequently formed the basis for working with all parties involved on targeted measures, and for monitoring the impact of those measures afterwards. The data analysis, carried out together with all stakeholders, quickly followed the initial period of data collection. This took the form of education and participation. At school, management, teachers and children from the fourth, fifth and sixth grades discussed the data that was collected. Using specially developed lesson cards, the pupils not only learned more about Telraam and traffic data, but they also conducted a broader debate on themes such as mobility, urban planning and climate change. In the same breath, the students also scrutinised their own travel behaviour and were able to dream aloud about a school environment that is truly suitable for children.

In the vicinity of a school in Eversel, Telraam devices monitored traffic in the street. This graph shows the speed distribution of cars on a particular day on the Everselkiezel school street. (Image: Mobiel21 - 2022)

However, participation didn’t stop at the school gate. In this phase, Mobiel 21 also organised a participatory workshop where, in addition to students, teachers and management, local residents, municipal employees and the local police also participated actively. The workshop helped participants to visualise the mobility problems in the vicinity of De Springplank on a street plan. For example, it was obvious that the school environment was unsafe for active road users, that there was a lot of through traffic (truck traffic) and there was parking chaos at the school gate. The Telraam data was also presented during the workshop and laid the foundation for a constructive dialogue.

This visual approach offered a starting point for arriving at solutions together, through round table discussions. For the school in Eversel, this method of co-creation led to concrete proposals to reduce freight and car traffic in the school environment, to encourage cycling and walking, and to reduce speed.

After the feedback and proposals for possible measures, it was time to test proposed solutions in practice using test set-ups. A steering committee, composed of representatives of the municipality, school, parents' council, local police and village council prepared the practical test set-ups and took care of communication. The test set-ups were to run between the beginning of May to the end of June 2022, with interim evaluation milestones to monitor the impact of the measures. In a first test set-up, the Everselkiezel, the street where the entrance to the school is located, was designated as a 'school street'. The street was closed to motorised traffic half an hour before and after school. This was done with a safety barrier and street sign with a lower sign stating 'school street' and the relevant operating hours. This created more space for active road users in the street. Street residents were still able to use the street thanks to permits issued by the municipality. 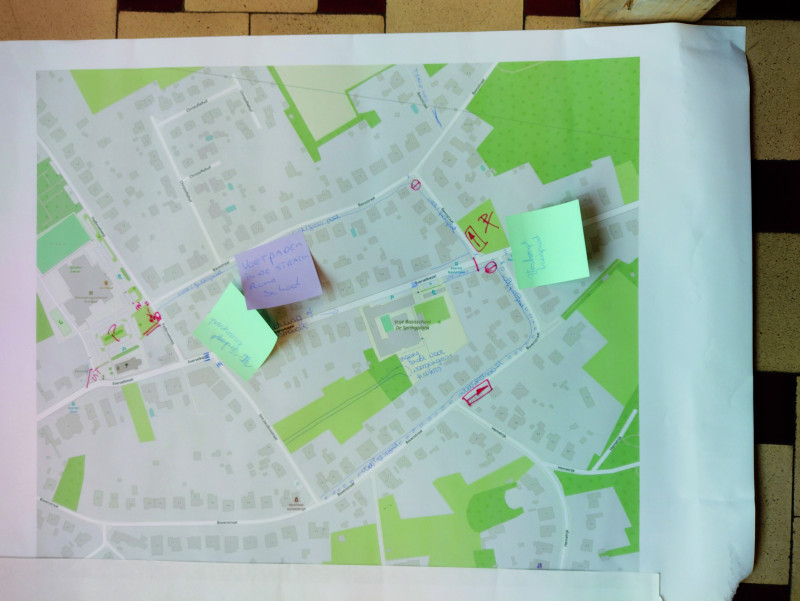 Citizen involvement via management, teachers, local residents, parents and children is central to the Telraam Eversel project. This ranged from installing sensors to actively taking part in workshops or evaluating the traffic measures taken. (image: Mobiel 21 - 2022)

The impact of this test was immediately apparent. The environment around the school gate was calmer and more pleasant. The space occupied by cars was freed up for pedestrians and cyclists. During the full morning rush hour, this led to an increase in the number of pedestrians (+2%) and cyclists (+13%) and fewer cars (-11%) and freight traffic (-4%). Because parents could no longer park their car in the Everselkiezel, near the school gate, they quickly started looking for alternative parking spaces to pick up or drop off their child. This led to unsafe crowds in the surrounding streets: drivers parked on the pavements and tried to turn around in narrow streets. In the Bovenstraat, for example, a 3% increase in car traffic was measured during the same morning school rush.

The test set-up was therefore tweaked with measures on surrounding streets after just a few weeks. The municipality placed bollards on the pavements and introduced parking bans. The use of one-way traffic prevented u-turns and offered active road users more space on Bavostraat and Bovenstraat, the access roads to school. 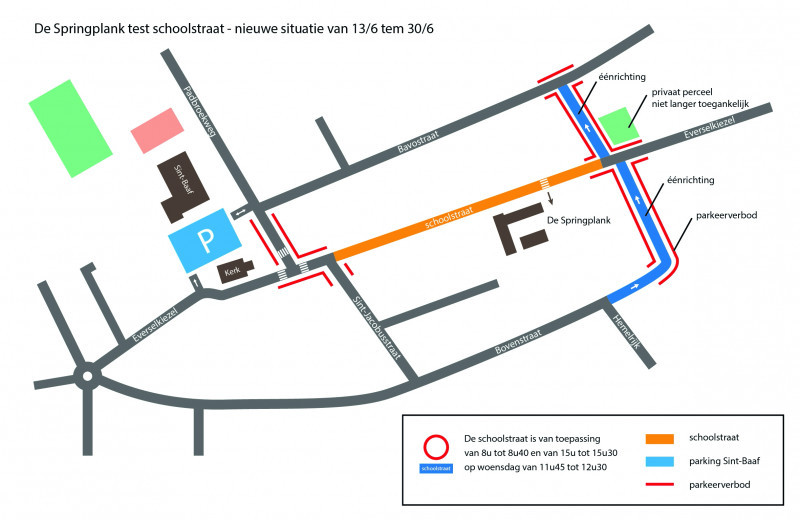 Map of test area during the 'school street' project with parking ban and one-way streets (image: Municipality of Heusden-Zolder 2022)

In terms of communication, the steering committee shifted up a gear by underlining the school street rules, promoting alternatives more actively, and directing local traffic to a nearby empty car park 400 metres from the school gate. All target groups received the necessary information through various channels (e-mail, residents' letters, Smart school, etc.). Also on the street, the management, with the support of the local police, encouraged parents to behave safely during school rush hour. “To create support for future permanent measures, you have to react quickly and communicate openly. Especially during a test setup. There are constantly new insights and interesting user experiences that you can draw on to optimize communication. It is essential that the various stakeholders always keep the ultimate goal of the process in mind: a safe school environment that encourages active mobility. Only in this way can we break through routines and meet the needs of different target groups ,” said Glenn Godin, Mobiel 21. 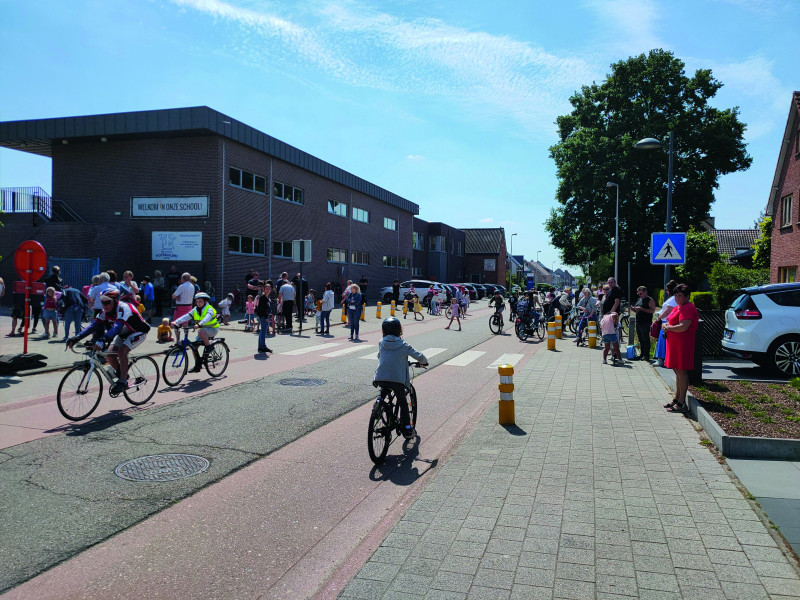 In a test scenario, a number of test setups for the design of a school street were developed, with interim evaluation milestones to review the measures. (image: Mobiel 21 - 2022)

Evaluation: a valuable package of measures, with pointers for action

Finally, feedback on the test was sought through a children's workshop and a survey of pupils, parents, local residents and teachers. The students answered unequivocally positively and shared all kinds of ideas for a permanent, creative design of the 'school street' by means of a ‘game of propositions’. More importantly, they hoped for permission from their parents to use the 'school street' independently by walking or cycling in the future.

Adult respondents indicated that safety in the 'school street' increased compared to the start of the project (60% of the 235 participants in the survey agreed). The experience of the 'school street' also received a positive assessment (54% considered it positive). However, parking and the detour factor remained sensitive issues, as did the lack of pedestrian crossings in the vicinity of the nearby car park. As a result, the respondents rated the use (37% of all respondents) and the safety (42% of the participants) of the car park rather negatively. Half of the respondents also opposed the one-way streets, although 57% of all participants recognized the road safety benefits for active road users. In terms of active road users, the analysis of Telraam data showed that the number of cyclists in the school environment increased during the test setup (+10%). The good weather during the test may also have played a role. In the Everselkiezel we see that the conflicts between cars and other road users decreased. On the other hand, the risk of conflicts increased in surrounding streets. An increase in bicycle traffic was observed on the Padbroekweg (+10%), but there was still a lot of car traffic (75% of all road users during school rush hours). On the Bovenstraat there was even a 7% increase in car traffic when the 'school street' is active. What was striking, however, was the drastic drop in the speed of car traffic. The V85 speed, or the speed not exceeded by 85% of drivers, dropped to 31 km/h in the 'school street' during the school rush hour during the test phase. Moreover, during the test phase, hardly any freight traffic passed through the school environment, with a sharp drop in the 'school street' (-10%) and the surrounding streets (-4% on average). 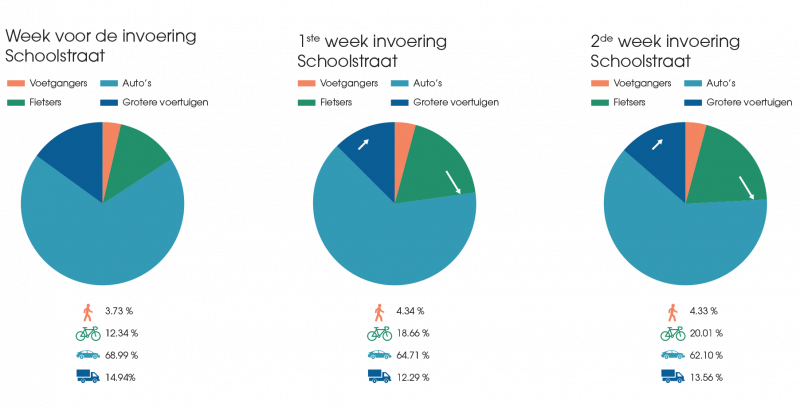 Modal split before and after the introduction of the 'school street' Everselkiezel, figures at weekly level. (Image: Telraam 2022)

Towards a permanent redesign

A permanent redesign of the school environment in Eversel is currently being prepared by the stakeholders involved.

From the start of the new school year, the municipality will manage the new traffic situation on the site. This is a continuation of the intensive process that ran for approximately a full school year. This permanent redesign will be created through consensus building between the municipality, the school, the village council, the parents' council and the local police. The final evaluation of the test setup, backed by Telraam data and user experiences, is the starting point. Telraam will continue to monitor the definitive impact on traffic safety and traffic flows in the school environment of De Springplank using the traffic sensors. In this way, the municipality of Heusden-Zolder can continue to respond quickly based on the current traffic situation in the school environment.

School on the Counter

Although the redevelopment project of the school environment has not yet been completed, the successful trajectory in Eversel has already resulted in a follow-up project: ‘School op de Teller’ (School on the Counter). The aim of the project is to get pupils from three school environments in Rotselaar, Aalst and Hooglede to think about mobility in their school environment. And here too Telraam data will play a leading role. Mobiel 21, Telraam and the Flemish Traffic Science Foundation are leading the project, in collaboration with the Flemish Department of Mobility & Public Works.

More information about the project via this link.

This article appeared in the September issue '22 of Verkeersspecialist (the Traffic Specialist). The authors are Glenn Godin (Mobiel 21) and Wouter Florizoone (Telraam).